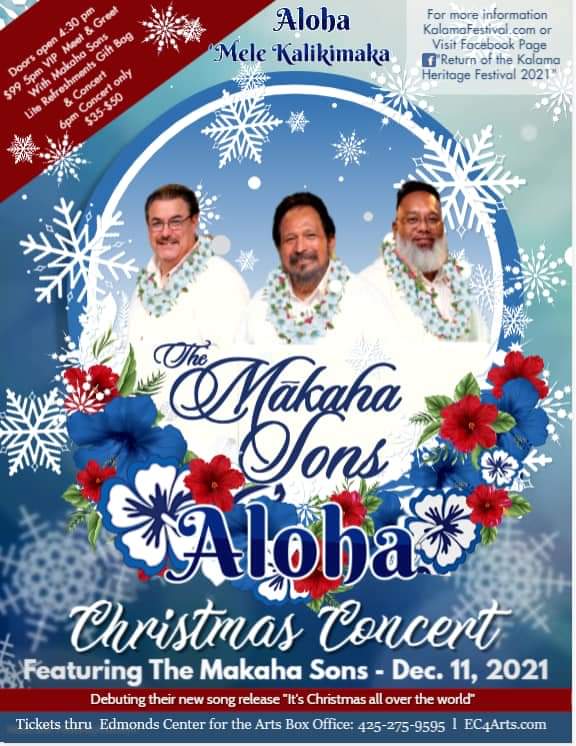 The Makaha Sons will be debuting their new Christmas EP titled “It’s Christmas All over the World.” Their musical talents, harmonies, energy, and new traditional songs remixed into new enhanced and unique Makaha Styles will make the concert unforgettable! In 2007, they were the first group to receive a Na Hoku award for “Best DVD.” In 2010, they were inducted into the “Hawaiian Music Hall of Fame.” Gloria Nahalea, Director of the renowned Kalama Festivals, admit love for their video interviews & Hawaii theater performances, being one of her favorite groups and always proud of them.

“Their concert will be amazing, as they have some fresh traditional songs, Remixed into their new Enhanced yet the Unique Makaha Style! I just love their video interviews & Hawaii Theater performances. Always one of my favorite groups! I can honestly say, each of their musical talents, harmonies, & energy among them is classically Makaha Sons! So proud of them.” said Gloria Nahalea, Director of the renowned Kalama Festivals.

In commemoration of the Makaha Sons’ 40th Anniversary, the group reflects on the times and places they have had the privilege and honor to have participated. Their performances have taken them to such prestigious places as Carnegie Hall in New York City, Washington D.C., and here in Hawai’i, with performances for both the President and Vice-President of the United States.

The Makaha Sons have received many proclamations and awards, both in Hawaii and the continental U.S., for their continuous and undying efforts to perpetuate the Hawaiian culture through their music. Their peers have also acknowledged their effort by awarding them countless “Na Hoku Hanohano Awards” for their timeless recordings and steadfast commitment to the music of Hawai’i.

One of the Makaha Sons, “Jerome Koko’s” debut CD with “Daniel Ho” released in October 2015 entitled, Memoirs served as a tribute and commemoration to the group’s journey thus far. This highly acclaimed recording captured the alluring harmonies and enchanting melodies of the magical sound that makes the Makaha Sons so memorable. Jerome Koko released his 2nd Solo CD in September 2018, entitled ‘The Makaha Sons,’ featuring the 6-time Grammy Award winner, producer, and songwriter, Daniel Ho. The songs featured on this CD are an eclectic blend of beautiful ballads, songs of love, and spiritual uplift.

Today, the Makaha Sons are considered to be one of Hawaii’s premier Hawaiian musical groups. For 40 years, the Makaha Sons have committed themselves to perpetuate traditional Hawaiian music throughout Hawaii and around the globe. Their incomparable vocal arrangements and delightful stage presence are filled with comical antics which have won the hearts of page thousands of fans worldwide. Edmonds Center for the Arts box office 425-275-9595 EC4Arts.com

Comments on “Makaha Sons December 11, 2021, In Concert Aloha Mele Kalikimaka Concert The director of the Kalama Festivals announces the concert, 11th of December 2021”

Welcome to our blog.